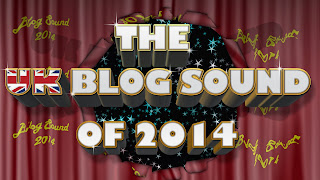 The Blog Sound Of... Poll was first published in 2011. The concept of the poll wasn’t to criticise the established BBC Sound of list, but simply an experiment to see if UK music bloggers could come up with its own list of emerging artists that was more representative of their community and give the artists that were nominated some extra publicity. Indeed the idea was to compliment the BBC list in many ways by providing an alternative to compare and contrast.

The 2011 list contained some interesting alternatives to the BBC list including Mercury Prize winners Alt-J and Bastille who have found huge commercial success in the UK in 2013. The 2012 list was more similar to the BBC list with Haim being the runaway winners, followed closely by Chvrches.

The UK Blog Sound of 2014 poll is the biggest yet with 59 blogs each nominating their 3 favourite emerging artists. It has been retitled to give emphasis to the fact that it is a list created by UK bloggers, although the choices of music can come from around the world. This year however, 15 of the 16 most voted for artists are British.

The winning act and close runners up will be revealed on the 2nd of January in a short list of three.

This list contains a range of artists that have all received strong coverage from UK bloggers over the last year and can therefore be seen to be a good representation of what music bloggers have been enjoying listening to.

The sixteen artists that made this year's UK Blog Sound of 2014 longlist are:

Banks - Sultry electronic music with a hint of soul from Los Angeles - the only non-UK act on the list.


So those are the sixteen acts that the collective hive mind of the UK blogosphere are most excited about for 2014. So what does this blog think of it? There's some great acts on the list, although the only one we've featured on the blog this year has been Rhodes. We also love George Ezra, who's song "Budapest" is something pretty special, and Marika Hackman, whom we kept meaning to write about but just never got around to. And of the acts we weren't too familiar with beforehand, the soaring E M B E R S are the ones who tick all our metaphorical boxes.

In terms of what we would have liked to have seen on the list, we're slightly gutted that no Northern Irish artists made the longlist, especially considering that two out of our three selections were from here and especially considering the wealth of talent 'our wee province' has to offer. But I guess it was to be expected, given that (to the best of our understanding) The Metaphorical Boat was the only NI based blog to vote in the poll.

Maybe one year there'll be an artist from here who'll make the list, or there'll be a few more bloggers from here contributing, but for the moment we're glad to have been a part of something this brilliant. Hopefully a few of these artists will be doing excellent things in 2014.

The music blogs that took part in the voting were:


17 Seconds, A Pocket Full Of Seeds, All Noise, Alphabet Bands, Beat Surrender, Both Bars On, Brapscallions, Breaking More Waves, Brighton Music Blog, Cat From Japan, Daisy Digital, Details Of My Life, Don’t Watch Me Dancing, Dots and Dashes, Drunken Werewolf, Eaten By Monsters, Echoes and Dust, Electronic Rumours, Faded Glamour, God Is In The TV, Gold Flake Paint, Hearty Vibes, I Love Pie, In Love Not Limbo, Just Music That I Like, Killing Moon, Like 1999, Little Indie Blogs, Love Music : Love Life, Music Broke My Bones, Music Liberation, Music Like Dirt, My Band’s Better Than Your Band, My Day By Day Music, Not Many Experts, Peenko, Pop Dodger, Repeat Button, Scientists Of Sound, Scottish Fiction, Skeletory, Sleep In Music, Some Of It Is True, Sound Influx, Sounds Good To Me, Sounds Of Now Music, Sweeping The Nation, The Blue Walrus, The Devil Has The Best Tuna, The Electricity Club, The Evening’s Empire, The Mad Mackerel, The Metaphorical Boat, The Sound Of Confusion, The Underclassed, The VPME, This Must Be Pop, Thoughts On Music, When The Gramophone Rings
Posted by Christopher McBride at 08:30