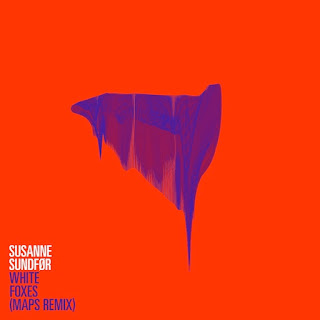 I have great respect for electronic musician James Chapman, who records under the name Maps. His 2007 Mercury Prize nominated sonic masterpiece "We Can Create" was the first album I bought from outside the Top 40, and kicked started my love of alternative music. As the world awaits his upcoming 3rd studio album, which like that album is being mixed by Ken Thomas, he has done a remix of Norwegian artist Susanne Sundfør's track "White Foxes", which is a treat for the ears.

Combining Maps' trademark electronic noodling with Susanne Sundfør 's breathy Scandinavian vocals, "White Foxes" is a track that sounds incredibly up-to-date. With a tour with M83 coming up in the future, it looks as if Susanne Sundfør is a name we will be hearing quite a lot from in the future.

The Maps remix of "White Coats" is available as a free download, and is taken from Susanne Sundfør's 2nd album "The Silicone Veil."

Posted by Christopher McBride at 13:45

Email ThisBlogThis!Share to TwitterShare to FacebookShare to Pinterest
Labels: electronica