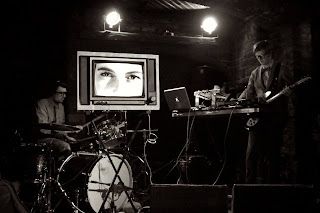 Having released the gloriously colourful "ROYGBIV" back in March, London duo Public Service Broadcasting are gearing up to release their first major E.P of the year. It follows the example of their previous single in using vocal samples as a starting point for sonic exploration, although takes it into much darker territory.

Having gained permission from the British Film Institute, PSB have taken samples from the WWII era film "The First of the Few" and turned it into "Spitfire", a thumping behemoth of a tune. Harsh drums, incredibly clever electronic noodling, and a powerful guitar riff mix extraordinarily well with the vocal samples, which help to bring home the message of the destructive power of war, and the futility of man's pursuit of it. The record itself is dedicated to the memory of the great uncle of PSB's J. Wilgoose Esq, who perished in the Battle of Dunkirk in 1940.

Posted by Christopher McBride at 15:27