This week has been a hectic one for fans of music in Belfast, with seven days of musical events being held all across the city in preparation for Sunday’s MTV EMA Awards from Belfast. Perhaps my most anticipated event of the week has been the Belfast Calling event at the Limelight Complex. Twenty-eight artists play over eight stages in an acoustic driven style, with the proceeds from the ticket sales going towards the Alzheimers Society.

Some of the highlights of the evening were: 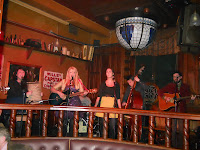 Katie Richardson and her ever-changing backing band (there were six on stage with her this evening) put on a great early performance, with her sultry, jazzy style helping to kick-start the evening’s proceedings.

It’s been a long time coming, but I’m finally getting the chance to see the fantastic Peter McCauley, aka Rams’ Pocket Radio, live. The stripped down set, featuring just Peter at the keyboard (which sort of defeats the point of an acoustic performance, if I was being pedantic), is a fantastic one indeed, opening with “Dieter Rams Has Got the Pocket Radios”, followed by the glorious “Dogs Run In Packs”, and several more heartfelt piano-pop numbers. This is music for pulling the heartstrings, then nursing them gently back into place.

Playing acoustically without his backing band (The Great Bunch of Lads), John D’Arcy, fitted out in a bespoke red suit, plays through his high energy, pop-rock songs, including “Teenage Meltdown” and “Pop Tart”. Despite his songs usually being more band driven, they sound incredibly fresh when played with just guitar and vocals, with the setting showing off the guitar talents of D’Arcy that I had previously underestimated.

Of all the bands playing this evening, none get nearer to the spirit of Belfast’s greatest musical export, Van Morrison, than sextet The Vals. Their soul tinged classic rock goes down well in the setting of Katy Daly’s bar, and it’s great to hear the trombone used it rock music outside of ska-punk. The highlight of the set was the mandolin-led closer “Look to the One." 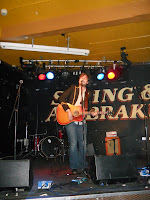 Quite how the organizers of the gig managed to book the lead singer of Starsailor to do an acoustic set is somewhat of a mystery, but the presence of James Walsh was very much felt by the crowd at Spring & Airbrake. Although he did play several of his new solo songs, as well as covers of “Raspberry Beret” and “Hungry Heart”, the set was dominated by stripped back versions of Starsailor songs, with classics such as “Poor Misguided Fool”, “Silence Is Easy” and “Four To the Foor” acting as a reminder that behind the expansive production, there are some fantastic songs in their back catalogue.

Posted by Christopher McBride at 01:18