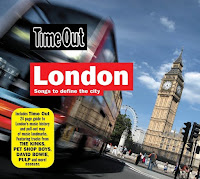 It's a shame that in the digital era, where playlists can be customized at the click of a mouse, that compilation albums seem to be becoming less relevant. Some compilations go on to invent entire genres (such as the legendary C86), whilst others carries personal memories for the listener (The Chartbusters compilation from 1997 still brings back memories of my first time in France as a child).
Released on 28th November, Universal, along with Time Out Magazine, released the compilation album "London: Songs to Define the City." The album is an assortment of songs about England's capital city, aiming to serve as "a musical souvenir of the world's music capital."
The twenty songs on the album seem to be targeted at a safe, middle class audience, with songs from Jamie Cullum, The Kinks and Roxy Music being among the artists featured. That isn't to say that it's a bad album. Although there is the odd clunker on the record (the aforementioned Cullum's "London Skies" is almost devoid of emotion) it is filled with cracking tunes.
Gerry Rafferty's "Baker Street" is as captivating as ever, "Piccadilly" by Squeeze is a bouncy treat, whilst Pulp's wry tribute Frith Street's coffee shop "Bar Italia" is a welcome inclusion.
Whilst some of the songs on the album might not portray London in the most positive light (how the wonderful "Electric Avenue" by Eddy Grant made it on to the album, with its opening line of "out in the streets there is violence", remains a mystery), the album is a decent tribute to a city that has been the setting of so many captivating stories.
Posted by Christopher McBride at 19:00