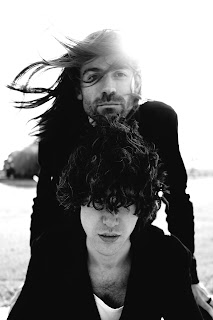 The Metaphorical Boat has been extolling the virtues on London duo Ten Fé for over a year now, with the psychedelic "Make Me Better" being named as our #1 single of 2015, and also being big fans of the driving rock sounds of "In The Air" & "Elodie". We've had the pleasure of seeing them live twice, once in London and once in Brighton (but zero times in Belfast yet, but hopefully that's something that will be remedied once they finally play here). Needless to say, their upcoming debut album, which is now scheduled to be released in 2017, is going to be a firm favourite with ourselves once it comes out.

Following the release of "Elodie", we said that as much as we loved the rockier side to the band, we were looking forward to hearing some of the more psychedelic sounding tunes they've played live being given a push. Well, it's almost as if someone's been listening to us, as Ten Fé have just released "Turn", which sees Leo Duncan take on lead vocals on a single for the first time since "Make Me Better" (we'd observed at their Great Escape gig that Leo tends to take on lead vocals on the weirder sounding tunes, with Ben Moorehouse taking the lead on the rockier songs).

The song takes its title and theme from the idea of "turning the other cheek". As everyone knows, this phrase originates from the Gospel of Matthew, where Jesus says to His followers that if anyone hits them on one side of the face, to turn around and let them hit them on the other cheek. It's a great sentiment, but one that can't always be applied universally. It would make boxing matches tediously one-sided, for example. The song itself is a woozy sounding slice of psychedelic sounding pop, one which isn't a million miles away from the sound of Jagwar Ma (interestingly, the bands share a producer, Ewan Pearson), and is another great piece of music from Ten Fé, one that hints at a wonderfully diverse album once we receive it.

Posted by Christopher McBride at 16:10