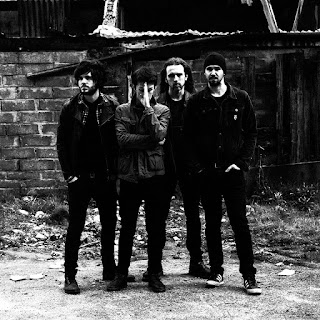 Northern Ireland's most visceral* rock band, Derry four-piece The Wood Burning Savages are back with an incendiary new single. The follow-up to "We Love You" back in March, "Been Anywhere Lately?" offers commentary on, in the band's own words, "a time where everyone is a celebrity or wants to be treated like one", and just like some of TWBS' best songs do date, couples this with an onslaught of sound that would rather befit Manic Street Preachers at their more confrontational.

"Been Anywhere Lately?" is out now, and is available on many fine playlists.

*Well, they are when they're not covering Cher songs whilst straddling a bloody giant cannon.
Posted by Christopher McBride at 19:03