In An Instant - Where The Demons and the Devils Speak 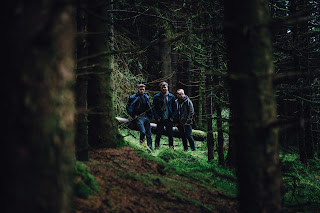 Given that Bangor band In An Instant have had songs featured in our Top 50 of the year from 2013 to 2015 inclusive, it is safe to say that any new material to come from them will be greeted by much rejoicing amongst these parts. And so it has come to pass that the band have unleashed a new single upon us, "Where The Demons and the Devil Speak", a title that makes it seem as if they band have made a surprising shift into black metal, but musically is very much in the In An Instant mold.

"Where The Demons..." follows in the archetype of IAI songs of yore, although in comparison to their previous songs the electronics are a lot more subtle, and the guitars are a little heavier, but in general it still retains the accessible, infectious, dance-y indie-rock that made us fall for the band in the first place.

"Where The Demons and the Devil Speak" is released on 8th July.

Posted by Christopher McBride at 14:53