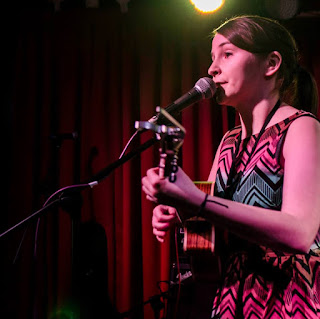 It's very rare on The Metaphorical Boat for us to cover a song that we've featured fairly recently in the past, but in this case, we're more than happy to make an exception.

Back in December last year, we came across Strabane singer-songwriter and ukulele enthusiast Lauren Bird after she performed two songs in a competition a friend of the blog was taking part in. She completely won us over both with her beautiful take on "No Surprises" and the self-penned "Goodbye, Good Luck".

And in the intervening period, she's gone on to win over even more people. In February, she was crowned the winner of Chordblossom's Kickstart competition (the same competition that boosted the career of Soak in her formative days), and in the past few months she's played several festivals, as well as being asked to support Hannah In The Wars on their Irish dates. She's also managed to find the time to compose the soundtrack for a feature-length film due for release next year.

And to cap off a great year so far, she's just released a new single, which is a updated version of the song that made us fall in love with her in the first place. A tale of learning to love being on your own, "Goodbye, Good Luck" has been given a slightly poppier upgrade from the earlier version, with added hand claps and other additional studio bobbinses, although the ukulele still remains at the heart of the track.

It's lovely to hear a fresh version of the song that made Lauren Bird grab our attention. Hopefully now it will now grab the attention of even more people.

"Goodbye, Good Luck" is available to download now. Lauren Bird will launch the single at The Bat With No Name on Friday 28th August. Support comes from Ciara O'Neill and Isobel Anderson.

Posted by Christopher McBride at 19:49