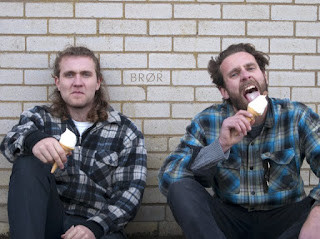 It's quite a speedy return for us at TMB to BRØR, the fraternal duo from Armagh whom we last featured on the blog back in April with their driving rock debut single "Something New", which helped them to win Chordblossom's Kickstart competition.

Which leads us on to the band's new single "Backburner", a song that has already won some love with the good people at Fresh On The Net and picked up some airplay on BBC 6music. "Backburner" sees a real change of pace for BRØR, being quite a sparse track underpinned by an arpeggiated guitar, and is a narrative driven song about being eaten alive by marital mistrust. It's a real bolt from the blue track from them, but one that is a rather fine one indeed.

The video's pretty great as well, and offers a bit of light relief from the somewhat dark lyrics, featuring a magician, puppetry and drag.


Posted by Christopher McBride at 19:37