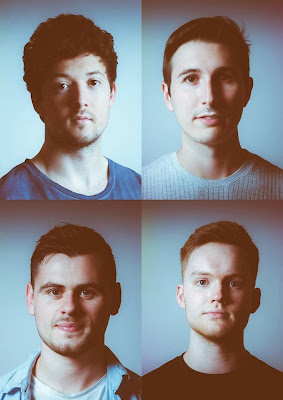 Hurdles really do like taking their time, don't they?

We first featured the band way back in 2012 following the released of their first single "Pictures". They then released one of our favourites tracks of 2013 with "Kaleidoscope", as well as a first E.P. to boot. They then took things relatively quietly in 2014 until the very last month, when they unleashed "France" upon us, and now more than a year after that, the quartet are releasing their second E.P, of which "Dusk & Dawn" is the title track.

If you've been familiar with Hurdles in the past, then you'll know exactly what you're getting with these guys, but if not, then you're in for a delicious little treat indeed. Finely crafted, tropical, sleek and polished indie-pop very much in the Phoenix mode. Welcome back guys. Now let's not leave the follow-up waiting too long this time, please?

Posted by Christopher McBride at 17:05