Straw Bear - All You Need Is An Electric Guitar 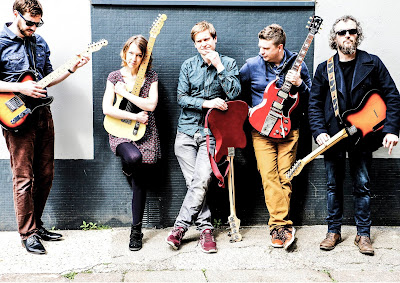 Now here's a welcome return for a band whom we have much affection for. London 5-piece Straw Bear first captured our attention back in 2012 with their lovely single "Kitty" and its accompanying album, "Black Bank", which at the time we described as a great example of 'postmodern English folk'. Although it didn't pick up as much love as we would have liked it to, it did earn the praise of Bob Harris and Tom Robinson among others.

Now fast forward a few years, and the band have just unleashed their first new material in quite a while. "All You Need Is An Electric Guitar"[citation needed]   is the band's ode to the power of music, a song which follows on nicely to the sound that the band produced on "Black Bank", with the addition of some lovely psychedelic guitar lines to the mix as well. Since it went live last month, the single has already picked up quite a bit of love online, so here's hoping that this song will give the very much under-appreciated Straw Bear the boost that they deserve.

"All You Need Is An Electric Guitar"[citation needed]  will be released on 18th December.

Posted by Christopher McBride at 18:20