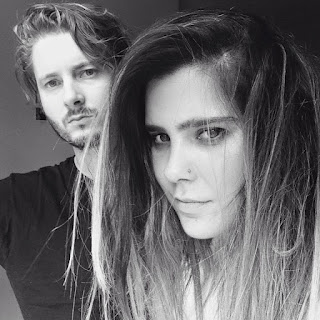 Whilst it's a shame that Mike & Ruth Aicken have now officially put their wonderful folk group The Jepettos on hiatus, it's fair to say that their new music project, New Portals, has been going down a storm. Their songs have got airplay on both Radio 1 and Radio Ulster, been picked up for a popular playlist on Spotify, and their live show got a positive, yet under-researched review in The Huffington Post (brother & sister? The Japettos?).

So what better time to drop a new single on us than now. "Groove Boy" takes its inspiration from acts like Oh Wonder & Broods, and is a heavenly slice of electro-pop,  with its dreamy xylophone lines, sleek synthetic production, and of course, the luscious harmony vocals that this husband and wife duo have become known for under their various different guises.

New Portals have hit upon a sound that is very much in vogue at the moment, yet the imbue it with just enough originality and personality to set it apart from its peers. It's their most mainstream sounding single to date, and alongside other local acts like Loris, could see them at the forefront of the Northern Ireland's burgeoning electro-pop movement.

"Groove Boy" will be released on October 12th.

Posted by Christopher McBride at 16:44