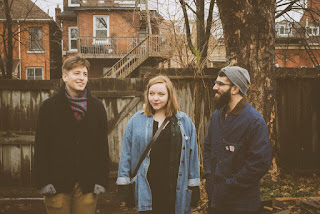 We all enjoyed "Johnny", the debut single from Hamilton, Canada based trio Basement Revolver, didn't we? The answer to that is yes. Yes indeed we did. For that single went on to accumulate over half a million streams on Spotify, and the eponymous E.P that it was taken from picked up a lot of love from all the cool blogs.

Well, it turns out that the band loved "Johnny" so much that they've written a sequel to it. Actually, 'loved' is probably not the best operative word, seeing as "Johnny Pt.2" was written directly in aftermath of the break-up with the titular fellow. In comparison to the more wistful "Johnny", the follow-up seems quite a lot more forceful & hopeful, underpinned by the punchy drums, and the central refrain of "my doors will always be open for you", a statement not of yearning for the past, but of hope for a fresh new future. Another solid slice of reverb-drenched indie-pop from Basement Revolver.

"Johnny Pt.2" is taken from the band's upcoming E.P "Agatha", which is released on July 21st.

Posted by Christopher McBride at 18:52