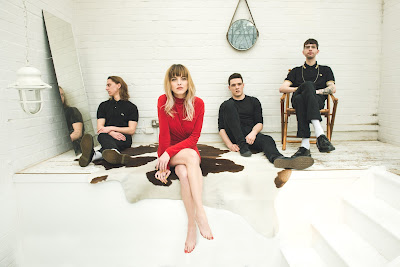 Of all the new acts that we've come across in 2016, perhaps our favourite of the bunch has been the London four-piece Anteros. They first grabbed our attention back in April with their fabulously catchy single "Breakfast", and our love for them was solidified when we got the chance to see them at The Great Escape in Brighton. After seeing them in the flesh, we predicted that one song in particular in their set was so good, that it would end up being their breakthrough single when they got around to recording it.

Well, the time has now come to see whether our prediction will come true or not, for Anteros have just released the song in question, "The Beat", and it's just as good as when we first saw it live. The song is an infectious little pop tune with a chorus so infectious that it'll be stuck inside your head for so long that even the world's most powerful cotton bud will be unable to scrub it from your brain. The song, and the band in general, will inevitably be compared to Blondie, although for our money the song is more in line with the sound of The Noisettes during the period when they were immovable from the upper echelons of the chart.

So will "The Beat" be Anteros' breakthrough single? The answer to that question is out of our hands, but if we had a say in it, it would be a resounding 'yes'.

"The Beat" will be released as part of the "Breakfast" E.P, which is out on September 19th.

Posted by Christopher McBride at 19:13