The Night VI - Thinking Of You 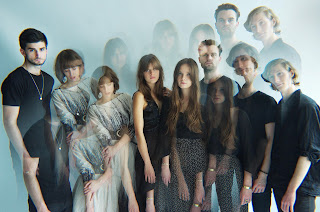 First of all, if you correctly identify the number of members of the following band based solely on the above press picture, then well done. Your perspective vision is much stronger than mine is.

As their name might suggest,The Night VI are a musical sextet whose songs are seductively dark. Recently signed to Parlophone, the Anglo-French group have released the first song from their upcoming E.P. "Thinking of You" is a song which feels like a throwback to the chanteuse-led songs of yesteryear with a very modern musical setup, the same combination that made Lana Del Rey so beloved. Unlike Del Rey however, the song is a rather uplifting affair despite the lyrical darkness, something that can be chalked down to the band's knack for a great, pop chorus.

The Night VI's E.P "Still Thinking of You" will be released on August 12th.