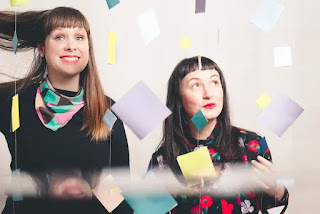 Formed in Korea, based in Berlin, and with members from Northern Ireland & Australia (if you know a more continent-spanning band, then you've got more time on your hands than me), Party Fears are a group that I have known about for some time, even though it's only been recently that I've taken the time to listen to their music.

Their name has been etched into my psyche for the last year and a bit, largely because their stickers appear to have been strategically placed in Belfast city centre along the route that I take every Monday to Friday on my walk to that place that I go to every Monday to Friday. I also bumped into them earlier this year when they were at a Jealous of The Birds gig in the Oh Yeah Centre, where they spent quite a bit of time hiding behind a curtain in the venue.

But it is their music that they're most known for, and having released a warmly received album in 2017, they have just released a new single, "Dog Star", and if you're new to their music, it's a pretty great jumping-in point. It's an ace slice of disco-inspired art-pop which is quite infectious and poppy in spite of the sombre theme of the lyrics.

"Dog Star" is taken from their upcoming E.P "Just Friends", which is out on 12th November.

Posted by Christopher McBride at 22:02