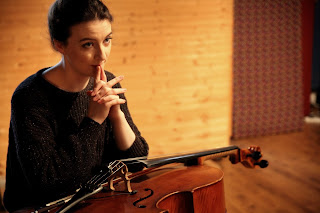 The humble cello is a much underrated and maligned instrument in the world of non-classical music. Not as sweeping as the violin, nor able to conjurer up the smoky atmosphere of the double bass, the cello  is the string section's lost child in are far as popular music is concerned. It's probably the reason why Luke Haines never refers to The Auteurs' cellist by name in his wonderful autobiography Bad Vibes (instead referring him simply as "The Cellist").

But there are some great musicians out there who are looking to give the instrument the respect it deserves, like Belfast's Alana Henderson. Her debut E.P, "Wax & Wane", puts the cello firmly at the heart of the music. The E.P is one that is deeply rooted in transatlantic folk tradition, and one that is an absolute joy to listen to. Henderson has a voice that is so natural and filled with emotion that is somewhat hard to believe that this her first release. On top of that, her faultless cello playing adds a degree of variety to the sounds, be it the Laura Marling-esque musings of the title track, or the jazzy feel of the E.P's highlight "The Tower".

"Wax & Wane" is a wonderful debut release from Alana Henderson, and one which should lift her, and the cello, out of the shadows.


Posted by Christopher McBride at 14:38