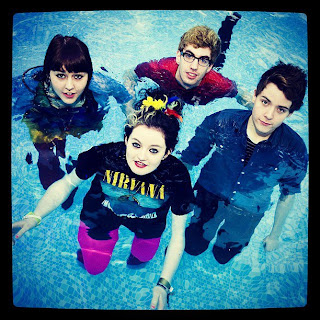 Last month, I was chuffed to bits to see this very blog profiled in The Guardian as part of its Blog Jam feature. One of the reasons why I started this blog was to cast a light on some of the great music that comes out of the north of Ireland, so I was glad to see some of our artists getting some added recognition as a result of that. However, when they asked me what song I most enjoyed, it was quite a challenge to choose just one, but in the end, I had to go with "TV" by Derry's finest Wonder Villains. As well as being a fantastic song in its own right, they are perhaps the artist that I've written about the most on this blog, so in a roundabout way, they were responsible for me getting featured in The Guardian in the first place. Thanks a lot, guys!

But anyway, what's important now is that Wonder Villains are finally putting the final touches to their upcoming debut album, which is due for release in the early summer. As predicted by yours truly in November, their new single is one that has become a live favourite for the group in recent months, "Blonde". The song is their slowest , and somewhat counter-intuitively, their shorted song to date, it still ranks as one of their most infectious pop songs to date. Not anti, indie or alternative, just pure, unadulterated pop. And I wouldn't want it any other way.

"Blonde" will be released on April 22nd, and will feature on their debut album "Rocky".

Posted by Christopher McBride at 20:23