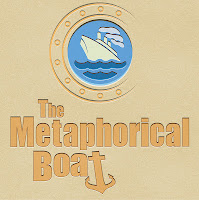 The earth has finally made its way back around to where it was this time 365 days ago, meaning that another year has passed us by. 2012 has been a memorable year for The Metaphorical Boat, in its first full calendar year afloat on the blogosphere. We've seen our traffic explode throughout the year, with more people than ever getting to hear some of the brilliant tunes that have excited me over the last 12 months. The blog was even shortlisted for three awards at the Blog Awards Ireland, and was lucky enough to be on the voting panel for the Blog Sound of 2013.

But now is not the time for the blog to rest on its laurels, for with the new year comes new challenges, new opportunities, and most importantly, new music. Therefore, The Metaphorical Boat has set itself a few musical New Year's Resolutions for 2013. Throughout the year, I hope that it can deliver all of this and more. They are:

1. Write more long-form articles.
Of the over 200 posts that I wrote in 2012, the one that I am most proud of is "6 Reasons Why The Artist You Love Isn't In The UK Chart." At over 2000 words, it was by far the longest post I wrote this year, and the one that seems to have provoked the most attention and debate, especially among fans of the UK chart. Therefore, over the next year, I endeavour to write several more long-form articles on areas of music and the industry that tickle my fancy.

2. Interviews
Despite running the blog for nearly 18 months of running The Metaphorical Boat, there has yet to be any interviews carried out for the blog. One of the reasons for this is that I have found taking an verbal interview and transcribing it in a form that is both informative and entertaining to be something of a challenge. Another is that I have a greater preference for radio interviews through my work at Queen's Radio, where I've interviewed The Joy Formidable and Pop Will Eat Itself, among others.

However, I feel that in 2013, it's time for the blog to try something new, and try to spend some time talking to some of the artists that we are passionate about, to understand what it is about what they do that excites them, and hopefully to learn some new things about them that were previously unknown.

3. Continue to cover as many exciting Northern Irish artists as possible.
In many ways, 2012 was one of the most exciting years for music in Northern Ireland. Snow Patrol are as popular as ever, Two Door Cinema Club continue their ascent, performing to ever growing audiences, and other popular local acts such as General Fiasco, Master & Dog and Duke Special returned with critically acclaimed albums. Some wonderful new artists began to make their mark in 2012, with artists such as Wonder Villains and Eatenbybears building up loyal followings. Then of course there's SOAK, whose rapid ascent from unknown to Radio 1 playlisted in the space of a few short months is slowly becoming something of legend.

There is so much talent coming out of Northern Ireland at the moment, and I have been proud to write about these aforementioned artists from here, as well as many others that I haven't got around to mentioning. With Derry/Londonderry being the UK City of Culture in 2013, all eyes will be on 'our wee province' over the next few months. Therefore, I will continue to highlight some of the best new artists coming out of here.

4. Encourage the establishment of more Northern Ireland music blogs.
Within Northern Ireland, there are some great websites and avenues that new and emerging artists have on offer in order to help to get their name out there. AU, the website of the now dormant Alternative Ulster Magazine, does a good job of highlighting some of the newer artists on the block, as does Chordblossom, another Northern Irish music website, which has gained a great reputation despite only existing for a year. And of course there's Across The Line, Radio Ulster's flagship new music programme, a show that opens up so many doors for the artists blessed enough to get airtime there.

Whilst all three of these do a wonderful job of promoting local artists, the one thing that they don't seem to be encouraging is the promotion of these acts on a national and international scale, which I guess is understandable based on their target audiences. This is why I believe that music blogs are the best way to go about building an audience, as a music blog can break down barriers and reach those from another country entirely. Indeed, this blog receives just as much traffic from America than it does from the United Kingdom, so artists looking to reach out to those beyond their own borders could do a lot worse that approaching their friendly local music blogger. (Hint hint)

Yet within Belfast at least, there seems to be a reluctance for passionate music fans to start blogging themselves. As far as I am aware, out of the 137 music blogs from the United Kingdom listed on the Hype Machine, only two of them are from Northern Ireland. Gigantic, a blog run by the DJs of the club night of the same name, and yours truly. We have a great many fans of new music here, both of local stuff and further afield, yet very few are reluctant to start blogging themselves.

Therefore, it my resolution to encourage as many of those people to stop procrastinating an encourage them to get on the blogging waggon themselves. It's an inexpensive exercise, and its greatly rewarding when you discover that someone has found their new favourite musician as a result of the song you posted. Let's see if we can get a few more blogging Nordies by the end of 2013, eh?

5. Buy a captain's hat
Well, I can't continue being the captain of The Metaphorical Boat without a captain's hat, can I?
Posted by Christopher McBride at 21:31