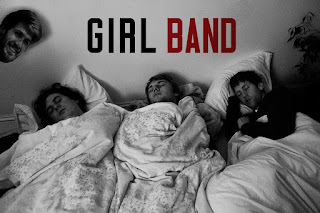 If you like your rock music to be primal, scuzzy and full of energetic urgency, then Dublin based quartet Girl Band may be right up your metaphorical street. Across the six tracks that make up the "France 98 E.P", the recording is wonderfully lo-fi (but not to the extent of becoming a distraction), vocals are manic and shouty, whilst the guitars are distorted and firmly in the red.

The two track which stand out the most on the E.P. The first track on the record, "You're A Dog", channels the guitar riff of  "You Really Got Me" into the sound of early White Stripes. The second highlight is the title track, which clocks in at just 77 seconds, and sounds like Elastica with balls, both literally and proverbially.

"France 98 E.P" will be released as a limited edition 12" vinyl on February, and can be downloaded from their Bandcamp page.