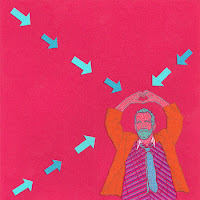 I first heard about Nottingham based band Lux Lisbon after their politically charged single "Bullingdon Club" became a firm favourite with both Tom Robinson and Billy Bragg. This week, they have released their latest single, "Your Heart Is A Weapon the Size of Your First", which I must say is in the upper echelons  of awesomeness.

The song is a synth-led power-pop song which is full of spiky energy and a chorus as big as the Grand Canyon, one which calls to mind the work of The Killers, or the more electro moments of Bloc Party. It's an incredibly infectious number, and one that needs to be savoured.

The group have also released a brilliant music video to accompany the release, which sees the band fight off a zombie invasion in a computer generated world. It's a cracking video, and one which goes to show that even on a modest budget, you can create something wonderful if you're brimming with creativity.

"Your Heart Is a Weapon the Size of Your Fist" by Lux Lisbon is available now as a free download. An album by the band with the same name is also available.